Deal with the government. The agreement will help to create tens of thousands of highly-skilled jobs across the UK and attract billions of pounds in investment to this country.

This is the first Sector Deal for a renewable energy technology. It puts offshore wind at the centre of the nation’s clean, affordable and reliable energy system, almost quadrupling our capacity from 7.9 gigawatts now to at least 30GW by 2030, generating one-third of our  electricity.

The UK is already the world leader in offshore wind, with more capacity than any other country, the biggest offshore wind farms and the most powerful turbines. The supply chain extends to every part of the country, and UK companies are already exporting our offshore wind products and services to more than 20 countries. With the Sector Deal now in place, those exports are set to increase fivefold in value to £2.6 billion a year by 2030.

The Sector Deal builds on our nation’s success, notably by the industry investing up to £250m to develop the UK supply chain, increasing productivity and fostering innovation. This includes an investment of up to £100m in a new industry programme, the Offshore Wind Growth Partnership, which will help UK companies seeking to grow their business in the rapidly-growing global offshore wind market, as well as a new initiative to develop skills for the sector.

The Energy and Clean Growth Minister Claire Perry said “This new Sector Deal will drive a surge in the clean, green offshore wind revolution that is powering homes and businesses across the UK, bringing investment into coastal communities and ensuring we maintain our position as global leaders in this growing sector.

“By 2030 a third of our electricity will come from offshore wind, generating thousands of high-quality jobs across the UK, a strong UK supply chain and a fivefold increase in exports.  This is our modern Industrial Strategy in action.”

The Co-Chair of the Offshore Wind Industry Council and Ørsted UK Country Manager for Offshore, Benj Sykes, said: “Now that we’ve sealed this landmark deal with our partners in government, as a key part of the UK’s Industrial Strategy, offshore wind is set to take its place at the heart of our low-carbon, affordable and reliable electricity system of the future.

“This relentlessly innovative sector is revitalising parts of the country with transformational,  sustainable opportunities, especially coastal communities, from Wick in the north of Scotland to the Isle of Wight, and from Barrow-in-Furness to the Humber. Companies are burgeoning in clusters, creating new centres of excellence in this clean growth boom. The Sector Deal will ensure that even more of these companies win work not only in the UK, but around the world in a global offshore wind market set to be worth £30bn a year by 2030”.

The Chief Executive of RenewableUK. Hugh McNeal, said: “The Sector Deal is about creating opportunities for the people who will be part of our 27,000-strong offshore wind workforce. We’re setting up a new body to develop the right skills for years to come, not only by offering apprenticeships, but also by helping experienced people from other parts of the energy sector, as well as the military, to make the change into offshore wind. We also want to ensure far more diversity in the industry, by reaching a target of at least  33% women employees by 2030, and by recruiting people from a wider variety of ethnic backgrounds”.

“This Deal will also ensure that the UK maintains its leading role as an offshore wind  innovation hub, accelerating our world-class R&D in fields like robotics and AI, and cutting-edge technologies being put through their paces at our globally-renowned test facilities”.

There are now 37 offshore wind farms operating in the UK, comprising nearly 2,000 turbines, totalling 7,899 megawatts (MW) and three offshore wind farms are under construction amounting to 2,520 MW. Beyond this, the pipeline of projects consists of:

20 wind farms (18,304 MW) with planning permission or in the consenting process

13 sites (10,425 MW) in development, but which have yet to submit planning applications

The first offshore wind project in the UK (2 turbines totalling 4MW) went operational in 2000.
It took 19 years to build Britain’s first 5 GW of wind capacity, but only 2 years to build the most recent 5 GW.
In 2017, the industry installed a record 2,121MW (see graph below) with an average turbine size of 5.8MW. 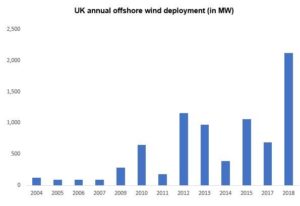 Offshore wind is the UK’s 4th largest infrastructure project, with investment of over £18bn from 2017-2021. (Treasury statistics)

UK companies are exporting offshore wind goods and services to 22 countries across 5 continents. (RenewableUK statistics)In last auction to secure renewable power (Sept 2017), the price for new offshore wind had nearly halved in two years – £57.50 per megawatt hour in 2017 vs. £114.39/MWh in 2015.This is significantly cheaper than the £92.50/MWh price for new nuclear power (BEIS statistics)

Public support for offshore wind reached a record high of 83% in 2018, according to the government’s official poll. It has remained consistently high, always polling at more than 70% since the BEIS Public Attitudes Tracker began in 2012. (BEIS statistics).